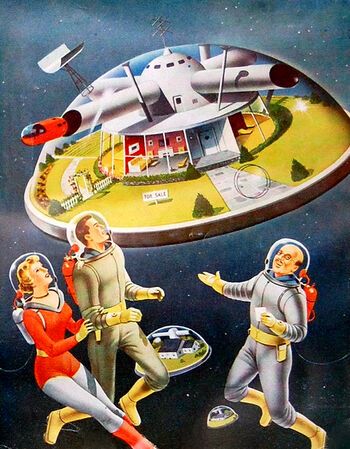 The Jetsons, Spaceman Spiff, Futurama
Atompunk is an aesthetic centered around a view of the future from the perspective of the 1950s. It tends to use a distinct, brightly-colored art style. It often depicts imagery associated with "traditionally American" values, particularly a belief in the nuclear family and the suburban lifestyle.

Atompunk envisions a utopian future characterized by bubble domes, glittering cities, and hover-cars for everyone, all powered by nuclear energy.

Googie architecture is a type of futurist architecture influenced by car culture, jets, the Space Age, and the Atomic Age. Common features in architecture included upswept roofs, usage of geometric shapes as well as neon, glass, and steel. It is often associated with Retro-Futurism. The term "Googie" has been dated back to architect John Lautner, who created the Hollywood landmark cafe 'Googies', but was coined to Douglas Haskell, editor of House & Home magazine. Because of this, Googie architecture will often times play a major role in design aesthetics often associated with Atompunk.

Atompunk as a cultural phenomenon originated in 1945 and continued until 1965. It is the period of retrofuturism following and slightly overlapping with World War 2's dieselpunk, emerging after the end of the Second World War. It was also preceded by raypunk or Raygun Gothic, a more specifically aesthetic movement (whereas Dieselpunk and Atompunk are more content-focused). Its optimism was powered by the relief of the Allied victory and by the belief that "if we can split the atom, we can do anything." It encompassed the era of mid-century Modernism, along with much of the Jet Age, the Atomic Age and the beginning of the Space Age. It dropped off somewhat around the beginning of the USA's involvement in the Cold War and gradually faded into pessimism.

Since 1965, most or all instances of this aesthetic have used it with the understanding that it is retrofuturistic (as opposed to simply futuristic, the way it was when it was created). The term "atompunk" most likely originated in 2005 ( attr(href) ), long after the first wave of the aesthetic died down.

The most well-known example of Atompunk in the present day is the Fallout series, where the aesthetic defined the technology and culture of America of an alternate timeline from the 1950s up until the bombs dropped in the year 2077.

Japanese atompunk artwork from a magazine.

The Transportation Of Tomorrow.

Levitating personal transportation for everybody.

The City Of Tomorrow. A fantastic prediction, with flying cars all over.

The City Of Tomorrow. This is a little more down-to-earth.

A sleek rocket ship that has landed on the moon. Notice the bold use of color. This is taken from the poster for the movie "First Spaceship on Venus."

Nuclear energy used in an advertisement for trains. Notice the atom symbol on the front.

Atompunk in space. I can't seem to find this image again so I can't give credit properly :(

The Lincoln Futura, a quintessentially atompunk car from 1955.

The Seattle Space Needle was built for the 1962 World Fair.

The Jetsons and their luxurious lifestyle.

Modern atompunk artwork uses it specifically as retrofuturism instead of futurism.

Raygun gothic views the future in a much more pessimistic light.

One problem with the atompunk aesthetic is its severe lack of diversity. The US in the 50s was not particularly colorful (besides the Technicolor).

An example of Googie architecture.

An example of an atompunk landship.

An example of googie architecture.

Community content is available under CC-BY-SA unless otherwise noted.

Is Star Trek this aesthetic?

Futurama is a parody of this aesthetic.

Actually, it's the key part of this aesthetic, it's the punk to the atom. The Jetsons and My Life As a Teenage Robot aren't really atompunk though.

So, googie is kind of like doo wap architecture? Cool

I would add Tomorrowland or Epcot on here!

Isn't it wild to think about how far people in the 20th century thought we were going to get to? This aesthetic is quite humorous to me in that way, because they all got the 21st century all wrong. I wish that I could have a hoverboard at times or even a teleportation device to help me get around these days

Uh thats, not Spaceman stiff! If I know that from anywhere that is Calvin and Hobbes.

Think Epcot towards when it first opened, there were some elements that fit this aesthetic. Especially some of Spaceship Earth (though its under construction right now so it will probably change)

Aka: "What people thought the future would look like in the 50's." Jokes aside, it's pretty cool

That's not a joke, though. That's exactly what the aesthetic is.

father of the western

There's no username, only monke

ₛₕᵣₒₒₘₗy.ₖᵤᵣₒₘᵢ
Hangout with people who get itJoin Discord
Others like you also viewed

Take your favorite fandoms with you and never miss a beat.