Asymmetric Opportunities and the Cult of Optionality

Everyone loves asymmetric opportunities. If the stock goes down, you lose nothing, but it goes up, you win! Taleb has written an entire book (or five) about them. The Naval / James Clear Twitter thread got thousands of likes and retweets.

A recent post from Tom Cleveland illustrates one type of asymmetric opportunity called a call option. It gives you the right, but not the obligation, to purchase an asset at a pre-specified price. If the asset price goes down, you don’t have to buy at a loss so your downside is capped. On the other hand, if the price goes up you can buy at the cheaper pre-specified price to earn a handsome profit.

What’s not to love?

1. The cost of optionality

To start out, understand that asymmetric opportunities are always still part of a larger market. If you’re buying, that means someone else is selling, and you should assume they know at least as much as you do. The more hyped these opportunities become, the more demand there is, and the worse the deal becomes. From Byrne Hobart’s Optionality is for Innumerate Cowards:

Ultimately, there’s a finite net amount of optionality in the world, and it’s zero: every time you pay for the option to buy or sell something in the future, you need a counterparty. If there’s a bias towards being systematically long something with a total net supply of zero, the buyers will tend to overpay.

This is true for financial markets, is it true in real life? Naval recommends investing in startups, and at face value this seems reasonable. If it goes poorly you lose a few thousand dollars, but if it goes well you might have allocation in the next Uber! The downside is capped, but the upside is tremendous.

But consider what happens when everyone has this mindset. As Sam Altman writes:

I should point out that this is a particularly hard time to invest in startups—it’s easier right now to be a capital-taker than a capital-giver. It seems that more people want to be investors than founders, and that there’s an apparent never-ending flow of capital looking for access to startups.

The law of supply and demand has done its thing. Valuations have risen, and the best investment opportunities are flooded with interest. As a friend of mine recently observed, "it’s much easier to get LPs to give you money for your seed fund than it is to get a meaningful allocation in a ‘hot deal’". [1]

1.b. An exception for exponential growth?

Jerry Neumann has a great post about power laws in venture capital. In a true power law, there is no well-defined mean. As Neumann summarizes:

So given that startup valuations do seem to follow a power law, does this imply that you should just invest in every single opportunity that comes your way?

In theory, yes. In practice, there’s no way to generate a random sample. If you stand on a street corner in Palo Alto writing checks, you’re not meeting random companies, you’re meeting the companies willing to take money from a random VC on the street. Similarly, Tom advises us to "go to meetups". That’s good advice in principle, but it really depends on who’s attending. You’re not pulling from a random distribution of people interested in X, you’re pulling from the pool of people who had nothing better to do with their time.

2. On optionality and long term value

Naval recommends "go on many first dates" and again, the asymmetric logic seems to work out. A date might take a couple hours, plus you had to eat dinner anyway so the downside is fairly low. Meanwhile, the upside potential is that you might meet your one true love! Fom Byrne Hobart again:

If there’s a low cost to switching to new partners, people expect it to happen and thus invest less in the partnership; if there’s a high cost, people invest more. …Love is an escape from the Prisoner’s Dilemma that is endless dating and indefinitely delayed adulthood.

There’s an analogous case in startups. If you invest in 100 random companies but spend no time actually helping them, they’ll be unlikely to let you in on future rounds, leading to dilution. But who cares? 30% less than $10m is still a lot of money.

I promise this is much worse than it sounds. Dilution does not affect your portfolio randomly. It is a side-effect of future rounds of funding. And since those same rounds are the path to the tail-end valuations you so desperately crave, this means systematically missing out precisely on the deals that generate outsized returns. Over-diversification is antithetical to value creation.

Finally, consider the case startup employees. The more companies you work for, the more lottery tickets you buy, and the more likely it is that at least one of them goes very well. In this context, optionally seems good at first glance.

Remember Slava’s machiavellian guide on How to get promoted? He shares this Jeff Bezos quote:

When somebody congratulates Amazon on a good quarter, I say thank you. But what I’m thinking to myself is— those quarterly results were actually pretty much fully baked about 3 years ago. Today I’m working on a quarter that is going to happen in 2020. Not next quarter. Next quarter for all practical purposes is done already and it has probably been done for a couple of years."

Along with the interpretation:

That’s fine if you’re a sociopath, but here’s the counter-contrarian reading: you can do anything you want for three years, and still learn nothing. If you want to build anything for the long term, you have to understand what the long term impacts of your decisions actually are. Switching companies every couple years means never seeing how your choices play out. It means never learning what it takes to build something that you’re truly accountable for.

Tom’s post also provides this nice XKCD comic, can you spot the problem? 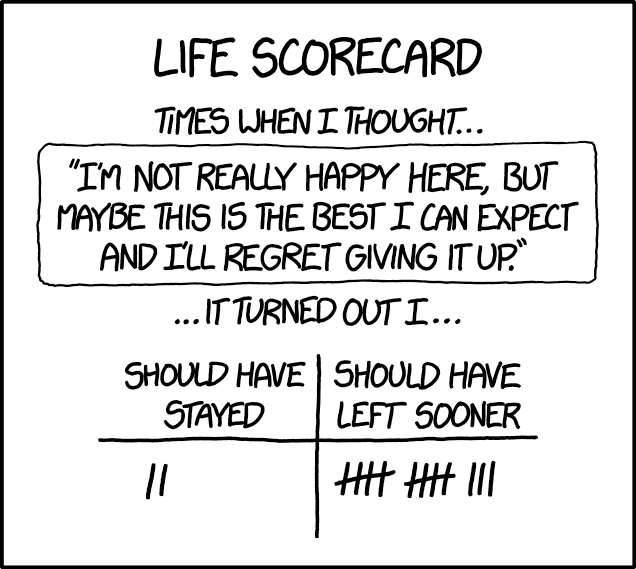 Regret is a function of new information. You only experience it when you later learn something that reveals a past mistake. If you exit a failing relationship, you’ll never see how things might have gone, and so of course you’ll never wish you had stayed. [2]

On the other hand, if you stay too long, you might find out it’s a waste of time and wish you had left earlier. Regret in these instances is purely a function of selection bias, and has little to do with which decision was actually better.

Similarly, a round of company layoffs that doesn’t include you could pave the way for rapid promotions. If you leave, you’ll think "thank god I got off that sinking ship!", and never learn about what could have been.

Ultimately, it’s all opportunity cost both ways. Just note that regret biases us in one direction without good justification.

But that’s not all. A second round of selection bias occurs in determining which stories we hear from others. No one talks about the time they lost $5. More generally, a dynamic of capped downside plus unlimited upside means the exciting and interesting tales will all come from one end of the distribution. [3]

4. The downside risk is bigger than you think

Remember that the whole financial perspective is just a metaphor. In real life, there’s no such thing as capped downside. Tabeb’s Black Swan became popular not because it provided a path to wealth, but because after the 2008 financial collapse it helped explain how arbitrarily bad events can come out of nowhere.

The downside of going on a first date isn’t having a mediocre dinner and then getting ghosted. It’s that they become your stalker and you have to get a restraining order. Or that they sexually assault you. Or accuse you of sexually assaulting them.

The worst case scenario of investing in a startup isn’t that you lose a bit of money, it’s that you invest in Theranos and appear in a documentary defending them. Wait no sorry, it’s that you go to jail for fraud.

Go to a cocktail party? Get roofied. Write a tweet? Canceled. Read a "Lindy book"? Get radicalized and spend the next 10 years neck deep in conspiracy theories.

The point isn’t that any of these things is likely. It’s that the downside in real life is never actually capped. Applying financial metaphors to life can be useful, so long as you understand the limitations.

None of this is to say that asymmetric opportunities are always bad, just that they’re overhyped and poorly understood. They’re one part of your overall portfolio. The meta-lesson here is that in an efficient market for metaphors, there are no silver bullets.

Alternatively: every trading strategy has a counterparty at least as smart as you are. The important life lessons are not about how to imitate finance, but about how to find real life scenarios that resist financialization and still allow for outsized returns.

Or maybe: Your life is already financialized, you just don’t understand how to navigate it. If you really grasped asymmetric opportunities, you would see that they improve with volatility. So the lesson is not necessarily "go on lots of first dates", but rather "go on a first date with someone you wouldn’t normally".

As the legendary essay from HBS finance professor Mihir A. Desair opens:

The language of finance can be insidious. Words like leverage and concepts like diversification can morph from narrow financial terms into much more general ways of understanding the world.

These are powerful tools, and we ought to be cautious in their application.

See AlsoJohn Luttig – Finance as cultureByrne Hobart – Optionality is for Innumerate CowardsMihir A. Desai – The Trouble with Optionality

Footnotes[1] Of course, the Straussian interpretation is that Sam is not really trying to be helpful so much as scare off potential competition.

[2] There are some exceptions, like finding out that your ex is now hot. But you’re much more likely to find out about changes in your current partner than your previous one.

[3] The contrarian take is that you should be optimizing for exciting and interesting tales, and no one cares about the time they lost $5 either. That’s fine, except that systematically making poor financial decisions limits your optionality in the long run. It’s not losing $5 that hurts, it’s buying a lottery ticket every day until you die poor.