Argentine Uruguayans are people born in Argentina who live in Uruguay. In 2010, there were over 10,000 Argentines living in Uruguayan territory.[2]

Many Argentine-born persons reside in Uruguay, for a number of reasons. Both countries share the same language, culture and ethnicity and their populations bear striking similarities; the historical origins of both nations is common (part of the Viceroyalty of the River Plate, Spanish Empire); both countries are members of MERCOSUR, there is no need for special migration documents, and circulation is relatively easy. Uruguay is a small, quiet country, with wide beaches on the Atlantic Ocean, so many Argentines choose Uruguay as their usual holiday destination, some of them even as permanent residence;[3] Argentine people come to Uruguay in search of a better quality of life.[4] The Uruguayan resort Punta del Este is famous as "the biggest Argentine seaside resort".[5]

The 2011 Uruguayan census revealed 26,782 people who declared Argentina as their country of birth.[6] In 2013, there were almost 6,000 Argentine citizens registered in the Uruguayan social security.[7]

Argentines in Uruguay have their own institutions, such as the Uruguayan-Argentine Institute, a bilingual school in Punta del Este.[8] 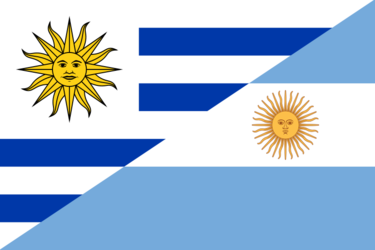