Against overuse of the Gini coefficient

The Gini coefficient (also called the Gini index) is by far the most popular and widely known measure of inequality, typically used to measure inequality of income or wealth in some country, territory or other community. It's popular because it's easy to understand, with a mathematical definition that can easily be visualized on a graph.

However, as one might expect from any scheme that tried to reduce inequality to a single number, the Gini coefficient also has its limits. This is true even in its original context of measuring income and wealth inequality in countries, but it becomes even more true when the Gini coefficient is transplanted into other contexts (particularly: cryptocurrency). In this post I will talk about some of the limits of the Gini coefficient, and propose some alternatives.

What is the Gini coefficient?

The Gini coefficient is a measure of inequality introduced by Corrado Gini in 1912. It is typically used to measure inequality of income and wealth of countries, though it is also increasingly being used in other contexts.

There are two equivalent definitions of the Gini coefficient: 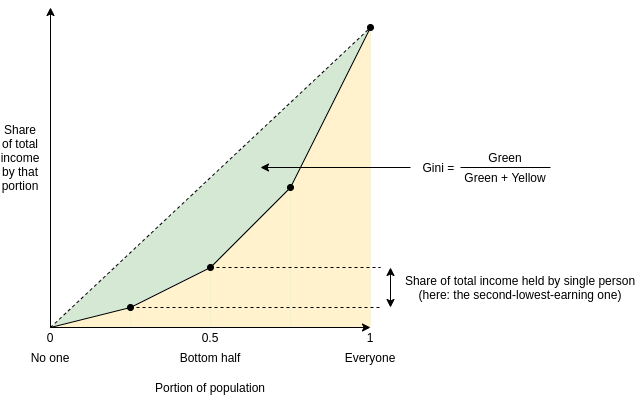 Average-difference definition: the Gini coefficient is half the average difference of incomes between each all possible pairs of individuals, divided by the mean income.

It turns out that the two are mathematically equivalent (proving this is an exercise to the reader)!

What's wrong with the Gini coefficient?

The Gini coefficient is attractive because it's a reasonably simple and easy-to-understand statistic. It might not look simple, but trust me, pretty much everything in statistics that deals with populations of arbitrary size is that bad, and often much worse. Here, stare at the formula of something as basic as the standard deviation:

And here's the Gini:

It's actually quite tame, I promise!

So, what's wrong with it? Well, there are lots of things wrong with it, and people have written lots of articles about various problems with the Gini coefficient. In this article, I will focus on one specific problem that I think is under-discussed about the Gini as a whole, but that has particular relevance to analyzing inequality in internet communities such as blockchains. The Gini coefficient combines together into a single inequality index two problems that actually look quite different: suffering due to lack of resources and concentration of power.

To understand the difference between the two problems more clearly, let's look at two dystopias:

Here are the Lorenz curves (fancy charts like we saw above) for both dystopias: 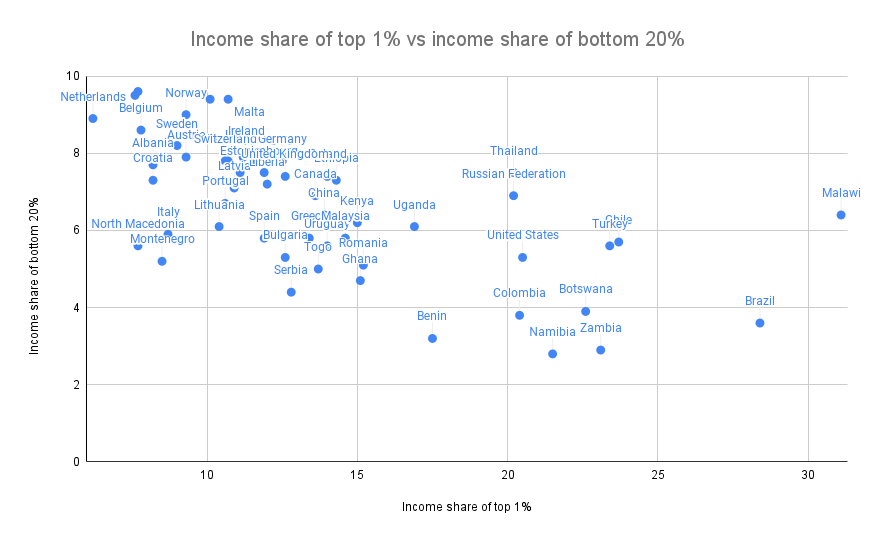 The two are clearly correlated (coefficient -0.62), but very far from perfectly correlated (the high priests of statistics apparently consider 0.7 to be the lower threshold for being "highly correlated", and we're even under that). There's an interesting second dimension to the chart that can be analyzed - what's the difference between a country where the top 1% earn 20% of the total income and the bottom 20% earn 3% and a country where the top 1% earn 20% and the bottom 20% earn 7%? Alas, such an exploration is best left to other enterprising data and culture explorers with more experience than myself.

Wealth concentration within the blockchain space in particular is an important problem, and it's a problem worth measuring and understanding. It's important for the blockchain space as a whole, as many people (and US senate hearings) are trying to figure out to what extent crypto is truly anti-elitist and to what extent it's just replacing old elites with new ones. It's also important when comparing different cryptocurrencies with each other. 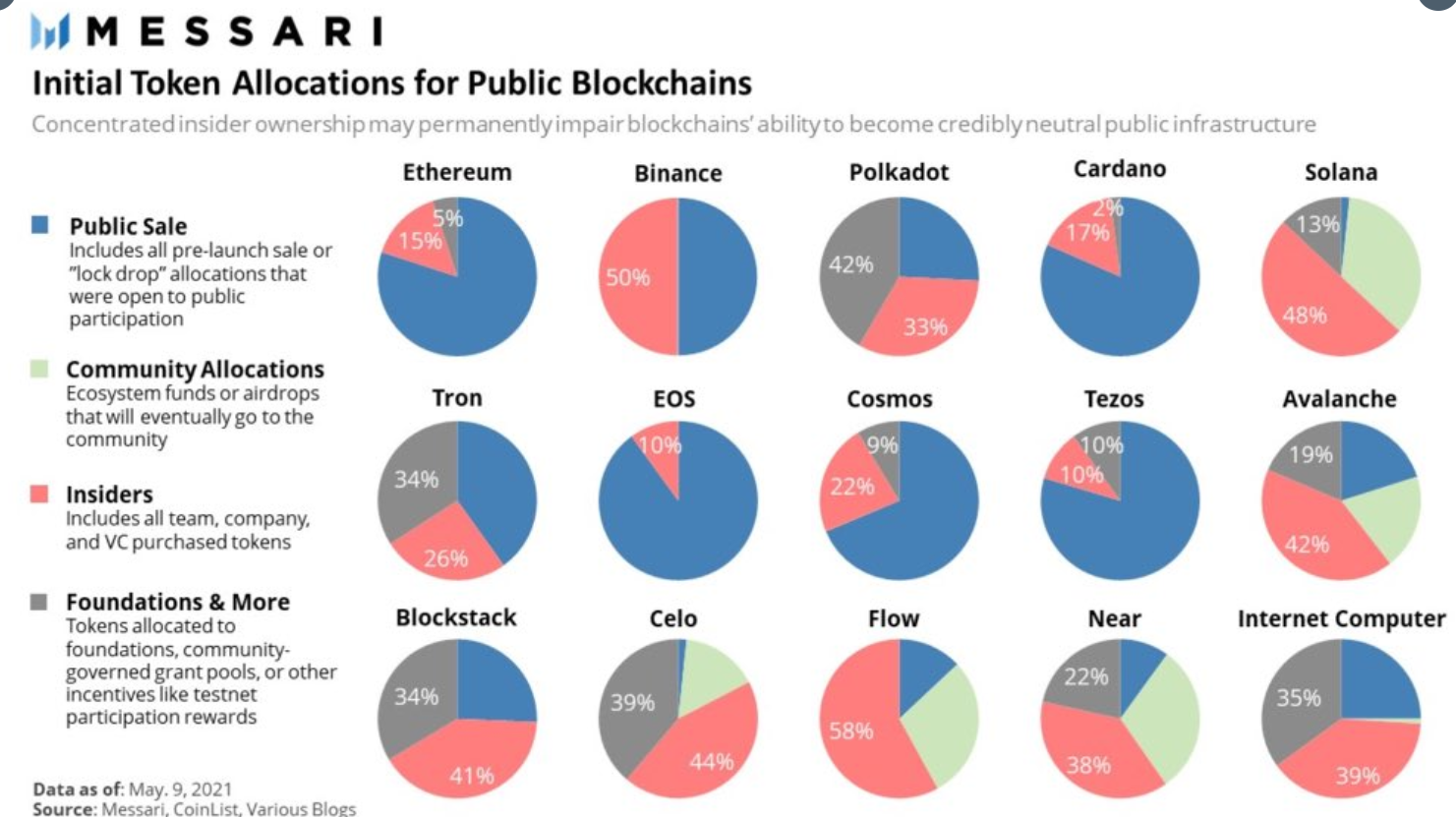 Share of coins explicitly allocated to specific insiders in a cryptocurrency's initial supply is one type of inequality. Note that the Ethereum data is slightly wrong: the insider and foundation shares should be 12.3% and 4.2%, not 15% and 5%.

Given the level of concern about these issues, it should be not at all surprising that many people have tried computing Gini indices of cryptocurrencies:

And even earlier than that, we had to deal with this sensationalist article from 2014: 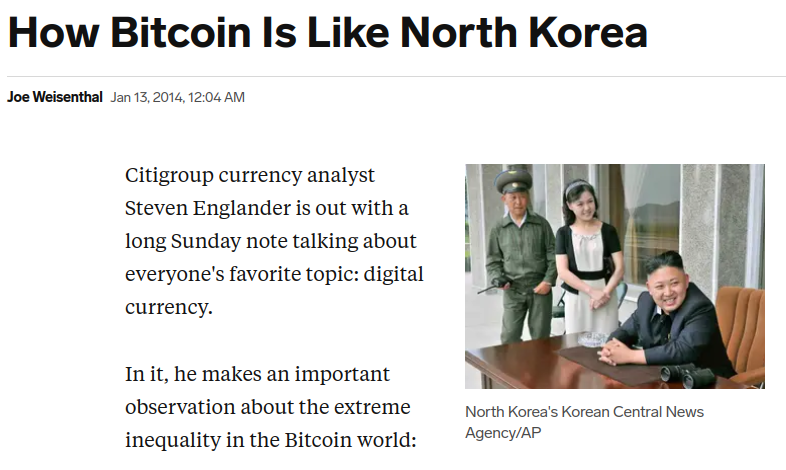 In addition to common plain methodological mistakes (often either mixing up income vs wealth inequality, mixing up users vs accounts, or both) that such analyses make quite frequently, there is a deep and subtle problem with using the Gini coefficient to make these kinds of comparisons. The problem lies in key distinction between typical geographic communities (eg. cities, countries) and typical internet communities (eg. blockchains):

The average person with $15 in fiat currency is poor and is missing out on the ability to have a good life. The average person with $15 in cryptocurrency is a dabbler who opened up a wallet once for fun. Inequality in level of interest is a healthy thing; every community has its dabblers and its full-time hardcore fans with no life. So if a cryptocurrency has a very high Gini coefficient, but it turns out that much of this inequality comes from inequality in level of interest, then the number points to a much less scary reality than the headlines imply.

Cryptocurrencies, even those that turn out to be highly plutocratic, will not turn any part of the world into anything close to dystopia A. But badly-distributed cryptocurrencies may well look like dystopia B, a problem compounded if coin voting governance is used to make protocol decisions. Hence, to detect the problems that cryptocurrency communities worry about most, we want a metric that captures proximity to dystopia B more specifically.

An alternative: measuring dystopia A problems and dystopia B problems separately

An alternative approach to measuring inequality involves directly estimating suffering from resources being unequally distributed (that is, "dystopia A" problems). First, start with some utility function representing the value of having a certain amount of money. \(log(x)\) is popular, because it captures the intuitively appealing approximation that doubling one's income is about as useful at any level: going from $10,000 to $20,000 adds the same utility as going from $5,000 to $10,000 or from $40,000 to $80,000). The score is then a matter of measuring how much utility is lost compared to if everyone just got the average income:

The first term (log-of-average) is the utility that everyone would have if money were perfectly redistributed, so everyone earned the average income. The second term (average-of-log) is the average utility in that economy today. The difference represents lost utility from inequality, if you look narrowly at resources as something used for personal consumption. There are other ways to define this formula, but they end up being close to equivalent (eg. the 1969 paper by Anthony Atkinson suggested an "equally distributed equivalent level of income" metric which, in the \(U(x) = log(x)\) case, is just a monotonic function of the above, and the Theil L index is perfectly mathematically equivalent to the above formula).

To measure concentration (or "dystopia B" problems), the Herfindahl-Hirschman index is an excellent place to start, and is already used to measure economic concentration in industries:

Or for you visual learners out there: 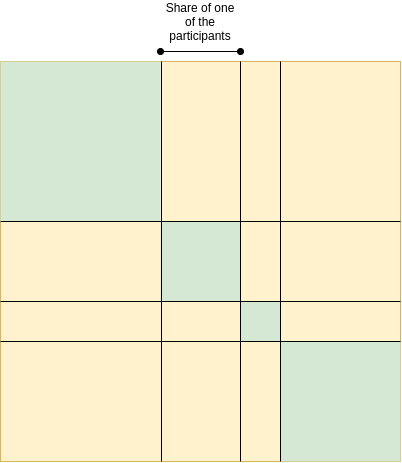 There are other alternatives to this; the Theil T index has some similar properties though also some differences. A simpler-and-dumber alternative is the Nakamoto coefficient: the minimum number of participants needed to add up to more than 50% of the total. Note that all three of these concentration indices focus heavily on what happens near the top (and deliberately so): a large number of dabblers with a small quantity of resources contributes little or nothing to the index, while the act of two top participants merging can make a very big change to the index.

For cryptocurrency communities, where concentration of resources is one of the biggest risks to the system but where someone only having 0.00013 coins is not any kind of evidence that they're actually starving, adopting indices like this is the obvious approach. But even for countries, it's probably worth talking about, and measuring, concentration of power and suffering from lack of resources more separately.

That said, at some point we have to move beyond even these indices. The harms from concentration are not just a function of the size of the actors; they are also heavily dependent on the relationships between the actors and their ability to collude with each other. Similarly, resource allocation is network-dependent: lack of formal resources may not be that harmful if the person lacking resources has an informal network to tap into. But dealing with these issues is a much harder challenge, and so we do also need the simpler tools while we still have less data to work with.