Devon's clippings   ·   Clipped: Mon-04-Jan-2021   ·   Original: ribbonfarm.com/2010/07/26/a-big-little-idea-called-legibility
July 26, 2010 By Venkatesh Rao
James C. Scott’s fascinating and seminal book, Seeing Like a State: How Certain Schemes to Improve the Human Condition Have Failed, examines how, across dozens of domains, ranging from agriculture and forestry, to urban planning and census-taking, a very predictable failure pattern keeps recurring. The pictures below, from the book (used with permission from the author) graphically and literally illustrate the central concept in this failure pattern, an idea called "legibility." 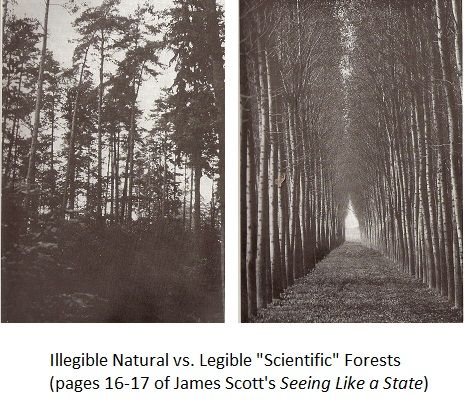 States and large organizations exhibit this pattern of behavior most dramatically, but individuals frequently exhibit it in their private lives as well.
Along with books like Gareth Morgan’s Images of Organization, Lakoff and Johnson’s Metaphors we Live By, William Whyte’s The Organization Man and Keith Johnstone’s Impro, this book is one of the anchor texts for this blog. If I ever teach a course on ‘Ribbonfarmesque Thinking,’ all these books would be required reading. Continuing my series on complex and dense books that I cite often, but are too difficult to review or summarize, here is a quick introduction to the main idea.
The Authoritarian High-Modernist Recipe for Failure
Scott calls the thinking style behind the failure mode "authoritarian high modernism," but as we’ll see, the failure mode is not limited to the brief intellectual reign of high modernism (roughly, the first half of the twentieth century).
Here is the recipe:
The big mistake in this pattern of failure is projecting your subjective lack of comprehension onto the object you are looking at, as "irrationality." We make this mistake because we are tempted by a desire for legibility.
Legibility and Control
Central to Scott’s thesis is the idea of legibility. He explains how he stumbled across the idea while researching efforts by nation states to settle or "sedentarize" nomads, pastoralists, gypsies and other peoples living non-mainstream lives:
The more I examined these efforts at sedentarization, the more I came to see them as a state’s attempt to make a society legible, to arrange the population in ways that simplified the classic state functions of taxation, conscription, and prevention of rebellion. Having begun to think in these terms, I began to see legibility as a central problem in statecraft. The pre-modern state was, in many crucial respects, particularly blind; it knew precious little about its subjects, their wealth, their landholdings and yields, their location, their very identity. It lacked anything like a detailed "map" of its terrain and its people.
The book is about the 2-3 century long process by which modern states reorganized the societies they governed, to make them more legible to the apparatus of governance. The state is not actually interested in the rich functional structure and complex behavior of the very organic entities that it governs (and indeed, is part of, rather than "above"). It merely views them as resources that must be organized in order to yield optimal returns according to a centralized, narrow, and strictly utilitarian logic. The attempt to maximize returns need not arise from the grasping greed of a predatory state. In fact, the dynamic is most often driven by a genuine desire to improve the lot of the people, on the part of governments with a popular, left-of-center mandate. Hence the subtitle (don’t jump to the conclusion that this is a simplistic anti-big-government conservative/libertarian view though; this failure mode is ideology-neutral, since it arises from a flawed pattern of reasoning rather than values).
The book begins with an early example, "scientific" forestry (illustrated in the picture above). The early modern state, Germany in this case, was only interested in maximizing tax revenues from forestry. This meant that the acreage, yield and market value of a forest had to be measured, and only these obviously relevant variables were comprehended by the statist mental model. Traditional wild and unruly forests were literally illegible to the state surveyor’s eyes, and this gave birth to "scientific" forestry: the gradual transformation of forests with a rich diversity of species growing wildly and randomly into orderly stands of the highest-yielding varieties. The resulting catastrophes — better recognized these days as the problems of monoculture — were inevitable.
The picture is not an exception, and the word "legibility" is not a metaphor; the actual visual/textual sense of the word (as in "readability") is what is meant. The book is full of thought-provoking pictures like this: farmland neatly divided up into squares versus farmland that is confusing to the eye, but conforms to the constraints of local topography, soil quality, and hydrological patterns; rational and unlivable grid-cities like Brasilia, versus chaotic and alive cities like Sao Paolo. This might explain, by the way, why I resonated so strongly with the book. The name "ribbonfarm" is inspired by the history of the geography of Detroit and its roots in "ribbon farms" (see my About page and the historic picture of Detroit ribbon farms below). 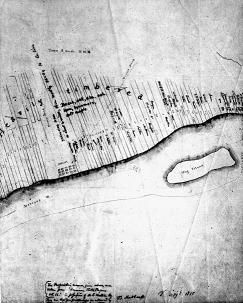 High-modernist (think Bauhaus and Le Corbusier) aesthetics necessarily lead to simplification, since a reality that serves many purposes presents itself as illegible to a vision informed by a singular purpose. Any elements that are non-functional with respect to the singular purpose tend to confuse, and are therefore eliminated during the attempt to "rationalize." The deep failure in thinking lies is the mistaken assumption that thriving, successful and functional realities must necessarily be legible. Or at least more legible to the all-seeing statist eye in the sky (many of the pictures in the book are literally aerial views) than to the local, embedded, eye on the ground.
Complex realities turn this logic on its head; it is easier to comprehend the whole by walking among the trees, absorbing the gestalt, and becoming a holographic/fractal part of the forest, than by hovering above it.
This imposed simplification, in service of legibility to the state’s eye, makes the rich reality brittle, and failure follows. The imagined improvements are not realized. The metaphors of killing the golden goose, and the Procrustean bed come to mind.
The Psychology of Legibility
I suspect that what tempts us into this failure is that legibility quells the anxieties evoked by apparent chaos. There is more than mere stupidity at work.
In Mind Wide Open, Steven Johnson’s entertaining story of his experiences subjecting himself to all sorts of medical scanning technologies, he describes his experience with getting an fMRI scan. Johnson tells the researcher that perhaps they should start by examining his brain’s baseline reaction to meaningless stimuli. He naively suggests a white-noise pattern as the right starter image. The researcher patiently informs him that subjects’ brains tend to go crazy when a white noise (high Shannon entropy) pattern is presented. The brain goes nuts trying to find order in the chaos. Instead, the researcher says, they usually start with something like a black-and-white checkerboard pattern. 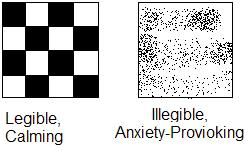